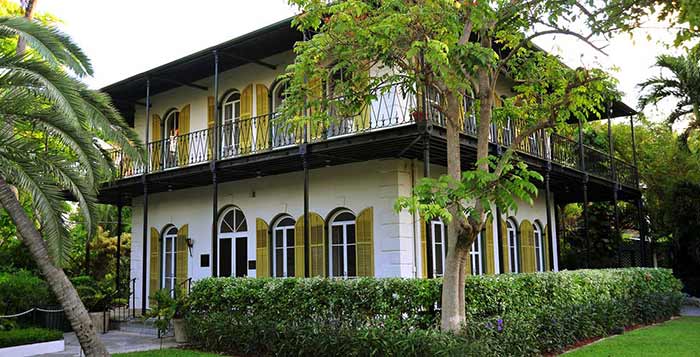 The Hemingway home is a Spanish Colonial structure built in 1851 and it was constructed of native rock hewn from the grounds. The home was in shambles but both Hemingway and his wife could see past that, appreciating the grand architecture of the home. In the early 1930s, the restoration of the home turned it into the National Historical Landmark that is visited by thousands of tourists today.

Hemingway lived in this house from 1931 to 1939 and today it is a private, for-profit landmark and attraction. It is famously populated by  polydactyl cats, that are descendants of Hemingway’s original cats.

It is believed that Hemingway did some of his best work in this house. Namely, “The Snows of Kilimanjaro” and “The Short Happy Life of Francis Macomber.” Additionally, the novel “To Have And Have Not,” and non-fiction “Green Hills of Africa” were also written there.

When Hemingway and Pauline divorced in 1940, he took up residence in Cuba. He continued to visit Key West during until his death in 1961. Throughout the years, Key West has been home to many writers and artists. However, none has had a presence and influence as profound as Ernest Hemingway.

Tours of the House and Gardens

Rates include a 30-minute guided tour.